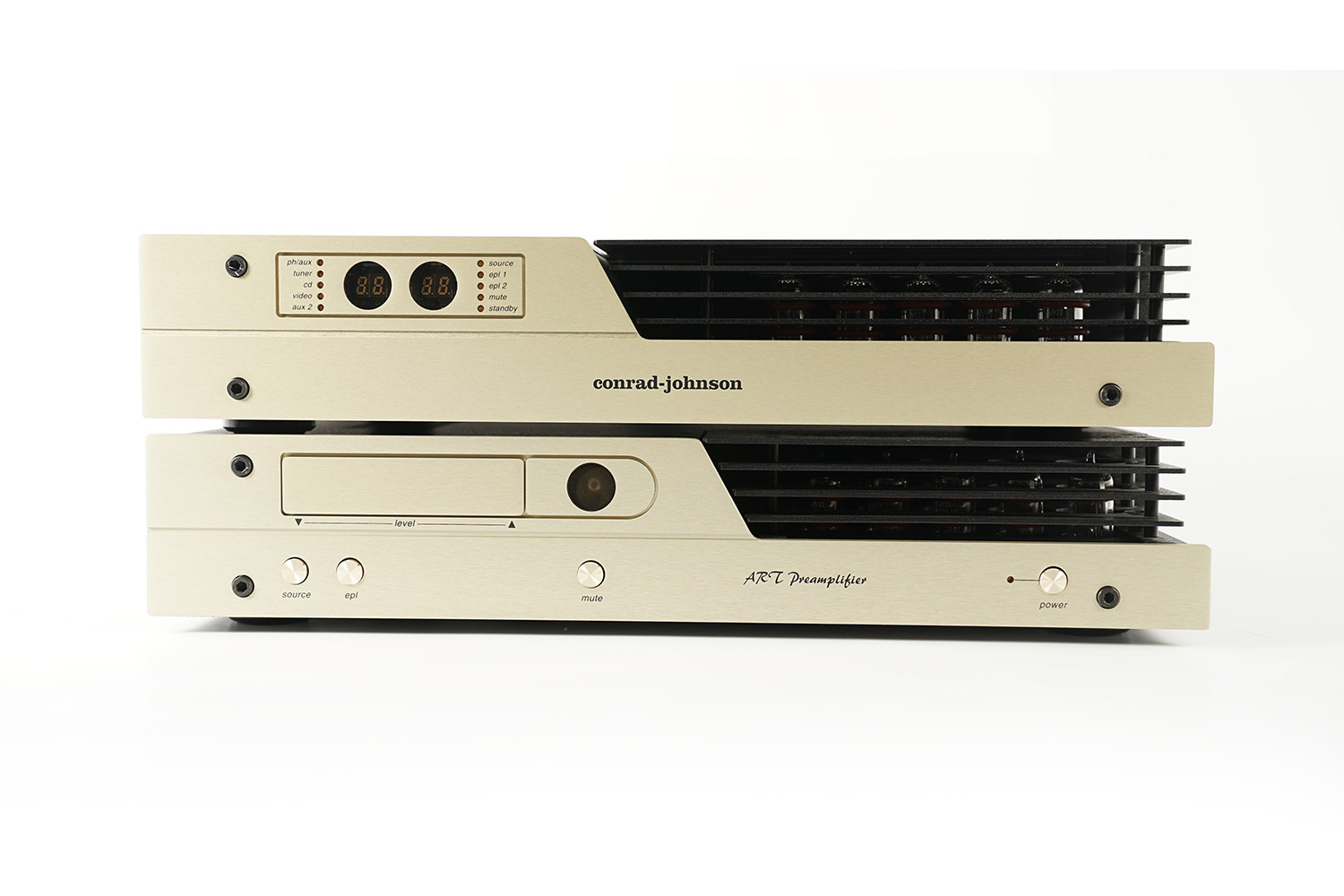 Conrad Johnson is one of the most dependable brand names when it comes to high-end audio systems. For years the brand has been recognized by audiophiles throughout the world as equipment that delivers clear and consistent quality in music.

What are the specs for the ?

What else to know about the ?

"I'd always wanted to listen to C-J's ART (for Anniversary Reference Triode) preamplifier, and got my chance recently, when Lew Johnson and Tor Sivertsen showed up at our door with one, before we all went out for a nice meal. (Never mind the equipment—how was the food?) But ah-ha! This was an ART Series 2, the latest and greatest incarnation of this legendary two-chassis, zero-feedback, 10-tube preamp. Wes Phillips reviewed the first iteration of the ART back in the May 1998 Stereophile (Vol.21 No.5). Since then, its price has risen a thousand bucks, to $15,995, but you can have your original ART upgraded for $1950. While the ART 2 still uses ten 6922 tubes in series to create C-J's so-called Composite Triode circuit, thus lowering the output impedance, the most obvious changes are the tidy, high-quality WBT connectors that now grace the design. For other circuit changes, check out my updates of C-J's Premier 15 phono stage (March 2002) and 16LS line-stage preamp (April 2002)—the "single-chassis ART," as it's become known. Too busy to look it all up? Briefly: The changes in the ART 2 revolve around faster rectifier diodes in the power supply, improved DC regulation, and a lower signal impedance path. Certain resistors have been changed for better sound, and the internal wiring and AC cords have been upgraded. The ART's two chassis are meant to be stacked. Together, they make a big, imposing component in black and gold, with the peekaboo tubes to the right surrounded by slotted protectors. The volume and remote-control RF pickup look a bit like portholes. Titanic, anyone? I placed the review sample (No.139 of 250) on a Silent Running SRA stand with an IsoDome perched on its top to ease the slight ringing I heard when I tapped it with a finger, all this supported by a tall PolyCrystal stand. To keep any microphonics from muddying the sound, I separated the chassis with large AudioPrism Isobearings. Interconnects were Synergistic Research Designer's Reference X-Series, which I auditioned both in active and passive in Discrete Shielding modes. Active, hands down. I used the Krell FPB 350Mc monoblock amplifiers because the Linn Klimaxes have such a low input impedance and the single-ended ART's source impedance is fairly high. AudioQuest Everest speaker cables connecting the amps to the JMlab Utopia speakers, with Synergistic AC cords finishing things up. Not having heard the original ART, I can't make any comparisons, but I can tell you how this one sounded: As I listened to one of my picks for last February's "Records To Die For," a disc of Haydn piano sonatas performed by András Schiff (CD, Teldec 0630-17141-2)—specifically Sonata 40 in G, Hob.XVI:40—I had the instant impression of a kind of ultimate refinement in playback, a quality very hard to describe. It was the kind of sound whose beauty makes everyone hold their breath. A guy like my late dad would have "air-conducted" without a moment's hesitation, shushing anyone foolish enough to speak during such sublime music. I was overtaken by an enormous sense of nuance, transparency, specificity of image, and the most wonderful illusion of air around Schiff and his instrument. Into this rang the initial leading-edge transient, its acoustic envelope blooming beautifully before dying out and hitting the noise floor, which was very low indeed. That was through the dCS Purcell/Elgar Plus driven by the Accuphase DP100 SACD/CD transport. Switching the output of the DP100 to the Accuphase DC101, there was an even greater sense of that difficult-to-define beauty and luminescence. I felt I could see Schiff's hands moving elegantly over the keyboard, not stabbing jazz-like, like the Duke's. The air was nothing short of incredible, the instrument in its own cushion of acoustically energized space. The sense of involvement was total. I live for this stuff. Changing up to the one and only Alfred Brendel playing his rendition of my favorite Haydn piano sonata, No.30 in b, Hob.XVI:32 (CD, Philips 412 228-2), I could hear so well the differences in their styles and, at the same time, the differences in recording technique. Brendel, one of my all-time favorites, is less gentle—the piano keys are there to strike and to make sing. The ability to hear such small details with such refinement and drama was a pleasure indeed for this jaded audio journalist. Switching to Duke Ellington's This One's for Blanton (Analogue Productions CAPJ015), the amusing "Do Nothin' Till You Hear from Me" was remarkable. I've complained endlessly about how, on this recording, the Duke's piano sounds as if it's slightly hard, even though it never detracts from the music. But there was no catch with the ART 2—no such problem reared its head. The sound was sublime, with just the right amount of metal in the piano strings, accompanied by the wonderful, unique Ray Brown's acoustic bass. Pure, unadulterated pleasure—deep, powerful, soul-filling. Brown's bass was so visceral, and I could so clearly hear and "see" his fingers as he plucked, that at track's end I wanted to get up and shake that hand. Again, bags of air, space, quickness of leading edges, and a colorful bloom belied the control at work. Switching briefly to LP, I dropped Bags & Trane: Milt Jackson & John Coltrane (Atlantic 1368), and Bill Evans' Trio '65 (Verve VV6-8613), and soon realized how synergistically Conrad-Johnson's Premier 15 phono stage worked with the ART Series 2—and, presumably, into all C-J gear. Air, quickness, colorful harmonics, timing, defining leading-edge transients—all served up an acoustic pleasure almost beyond description. What joy. Conrad-Johnson's ART Series 2 is expensive, but put the right ancillaries around it and you're headed for sonic heaven. Class A all the way! - Stereophile, Scull"

If you are interested in selling your used Conrad Johnson equipment to us in the greater NYC area or Colorado, please click here to fill out a Free Quote Form and we will get back to you. If we agree on terms, we come to meet you where you want, and pay cash.