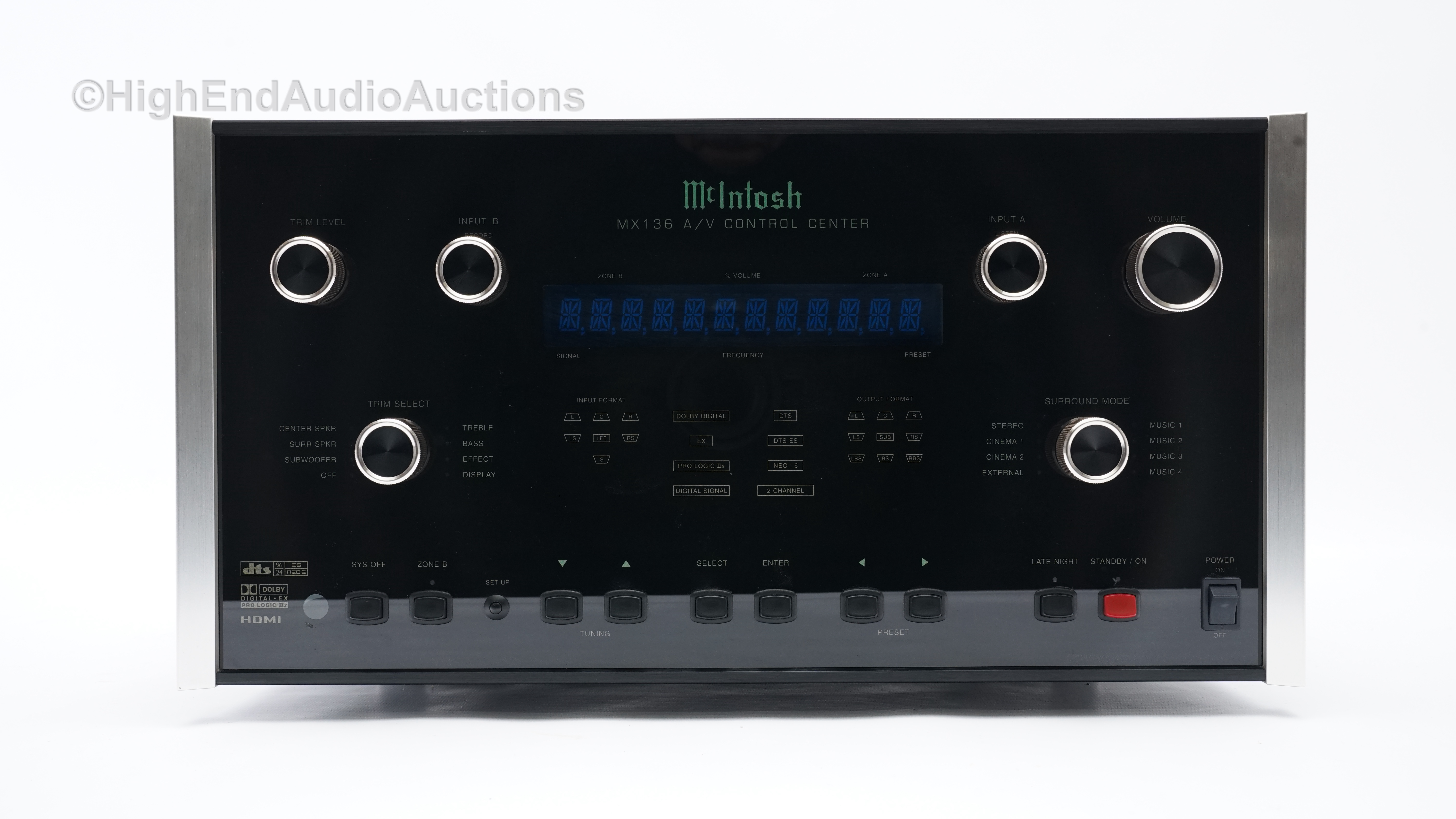 What are the specs for the McIntosh MX 136?

What else to know about the McIntosh MX 136?

Now you can take advantage of traditional McIntosh standards of excellence in the MX136 A/V Control Center as the heart of your Home Theater System. The MX136 provides superior eight channel reproduction with the latest in digital decoding combined with complete audio and video switching. The McIntosh MX136 sets new standards for accuracy in a Home Theater System • Balanced Inputs and Outputs Two pairs of Balanced high level Inputs and an eight channel Balanced Output are provided. • Moving Magnet Phono Input There is a Precision Phono Preamplifier for Moving Magnet Cartridges. • On-Screen and Multifunction Fluorescent Displays A comprehensive On-Screen Display capability makes it easy to perform setup adjustments using the Remote Control. The front panel display indicates volume levels, tuner functions, input selection, operating mode and setup functions. • Automatic Mode Switching with Auto Memory The MX136 Automatically Switches Operating Modes according to the input signal. Zone A will memorize the Preferred Mode settings last used for each input. • Separate Listen and Record Input Selection The 12 Analog A/V Inputs can be retitled for any desired signal sources. Any unused input can be “turned off” so the input selector will skip over it. All six digital inputs can be assigned to any A/V signal source for Zone A. Separate Record and Listen Circuits allow recording of one program source while listening to another. • Latest in Digital Audio Processing The MX136 incorporates the latest technology in digital multi-channel processing, including Dolby Digital EX, Pro Logic IIx, DTS-ES and NEO:6. • LED Channel Status Indicators The MX136 includes twenty-four LEDs on the front panel to indicate what type of operating signals are being received, signal processing mode and the output format chosen. Pure Stereo Outputs When the Stereo Mode of Operation is selected for an analog source the signal is amplified with no digital processing placed in the signal path. • Adjustable Channel Level and Time Delay A built-in test signal generator allows all eight channels to be calibrated for precise volume levels with either automatic or manual channel switching and can be adjusted for time delay to compensate for different distances from each Loudspeaker to the listening area. • Digitally Controlled Volume and Tone Controls A Precision Tracking Volume Control adjusts all eight channels with tracking accuracy better than 0.5dB. Digitally controlled bass, treble and loudness analog circuits provide a wide range of tone shaping with no loss in traditional McIntosh sonic excellence. • HDMI Video Switching with Digital Video Processing There are four HDMI Inputs and any Composite Video, SVideo, Component Video Input can be Up-Converted to a Component Video Signal and Digital Video Signal with the built-in Digital Video Processing Circuitry. • External Eight Channel Input An external eight channel signal processor can be connected to these inputs as well as a DVD-Audio Player or Super Audio Disc Player with a built-in processor. • Dual Zone The MX136 has the built-in ability to control a separate remote audio/video zone with program selection independent of Zone A, using a dedicated power amplifier and speakers. • Fiber Optic Solid State Front Panel Illumination The Illumination of the Front Panel is accomplished by the combination of custom designed Fiber Optic Light Diffusers and Light Emitting Diodes (LEDs). This provides uniform Front Panel Illumination, together with the extra long life of the LEDs. • Glass Front Panel The famous McIntosh Illuminated Glass Front Panel ensures the pristine beauty of the MX136 will be retained for many years.