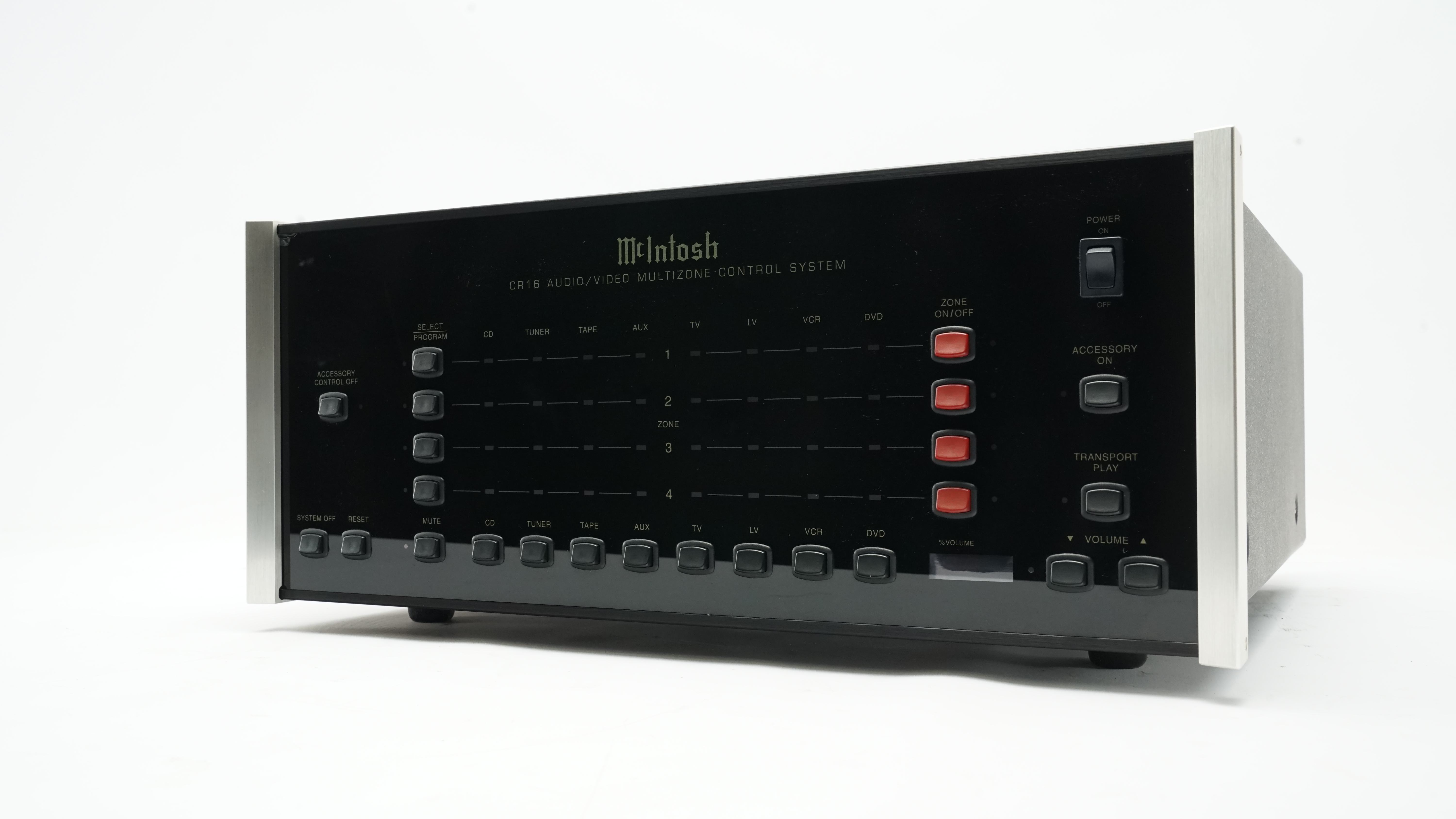 What are the specs for the McIntosh CR 16?

What else to know about the McIntosh CR 16?

For more than a decade McIntosh has offered multizone systems distinguished not only by musical excellence but also by operating ease and adaptability. A McIntosh multizone A/V system integrates seamlessly with non-McIntosh products and can be scaled for any size installation. If you love music and you want McIntosh performance, a multizone system gives you more of both. But it-�s also a smart investment, as it uses just one set of audio and video sources to supply any number of rooms or areas in your home. The CR16 Multizone A/V Control Center and the MC58 8-Channel Power Amplifier go together like hand in glove, offering abundant possibilities for a house-wide entertainment system with true McIntosh performance. FOUR INDEPENDENT ZONES (CR16). The CR16 is four audio/video preamps in one chassis, each with its own input selector, volume control, and tone controls. For example, you can listen to FM stereo in one zone, CD in a second, watch satellite in a third, and watch a DVD movie in a fourth -� all at the same time. In addition, a local -�private-� A/V source can be connected for each zone for use only by that zone. As many as six CR16s can be linked (-�cascaded-�) for a total of 24 independent A/V zones. CONTROL DATA OUTPUTS (CR16). To facilitate system integration, the CR16 outputs control data for source components. This allows remote operation of non-McIntosh components either by direct connection to compatible data inputs or via a McIntosh Remote Translator. REMOTE POWER CONTROL (CR16 + MC58).The MC58 receives power on/off data via its single cable link to the CR16. In addition, power control jacks provide the same capa- bility when the units are not linked. A special multipin jack on the CR16 connects to the PC3 AC Power Controller, which coordinates power on/off of zone amps, audio sources, and video components. EXCLUSIVE MCINTOSH TONE CONTROLS (CR16). Judicious use of well-designed bass and treble controls can compensate for acoustical irregularities. Each zone of the CR16 has its own bass and treble control that offers ±12dB adjustments with fine resolution, yet in the -�flat-� position is completelyremoved from the signal path. MATCHED AND BUFFERED VIDEO SWITCHING (CR16). High-resolution video sources such as DVDs demand high-quality video switching. Each CR16 video input is terminated with 75 ohms to maintain a proper impedance match. Video buffer amplifiers feed the CR16-�s monitor video output, ensuring no loss in picture quality. In addition, the input buffers feed a line-matched signal to the individual video outputs, preventing signal degradation if those sources are in turn fed to another CR16 or a master preamp. BALANCED CONNECTIONS (CR16). Balanced connections guard against induced noise and allow long cable runs without compromising sound quality. The CR16-�s four balanced outputs can be used to feed larger power amps (such as the MC202) for installations that require high sound levels. CONFIGURABLE POWER OUTPUT (MC58). Channels 1/2, 3/4, 5/6, and 7/8 can be operated either in the normal mode (50W x 8) or with each channel pair independently bridged (100W x 4). Configurations of 7, 6, 5, and 4 channels are also possible. For example, a 5-channel configuration for home theater would comprise three bridged channel pairs plus two normal channels, resulting in 100W x 3 for left/center/right speakers and 50W x 2 for the surround speakers. EXCLUSIVE MCINTOSH POWER ASSURANCE SYSTEM (MC58).Power Assurance is a collection of technologies that enhance performance and reliability and protect the amp and the loudspeakers. Power Guard ®clipping protection. Power Guard ensures that the amplifier will always deliver full power without causing clipping distortion. If an amplifier channel is over- driven, Power Guard automatically reduces the input volume just enough to keep distortion SPEAKERS multiple zones CR16 to McIntosh home theater system CABLE LINKS MC58 DISPLAYS SOURCES All it takes is one cable to join the CR16 and the MC58 (or MC7108) -� and one more to link a multi- zone system to a home theater. CR16 Multizone A/V Control Center MC58 Eight-Channel Power Amplifier Featured Technologies McIntosh Multizone A/V